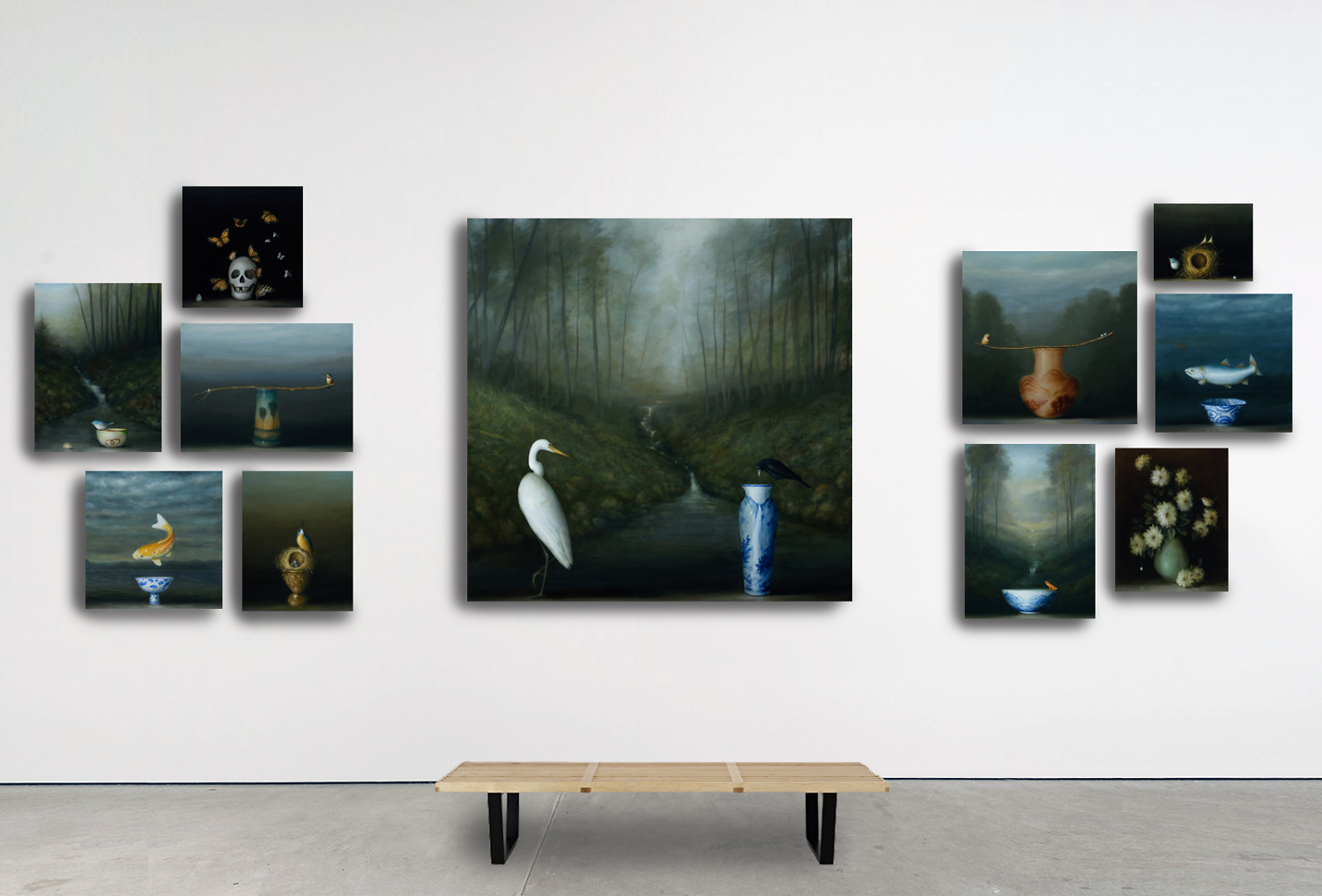 Still lifes that hum with movement and energy, David Kroll’s limpid oil-on-linen paintings delineate a compelling new dimension, a deliberate and serene juxtaposition of motion and time in contemplative space. The compositional center of many of Kroll’s paintings is a patterned or filigreed vessel displayed along with a collection of living creatures or organic matter; these subjects are foregrounded against deep, mysterious natural landscapes. As in the practice of meditation, the viewer’s attention hovers between the silent, unknowable distance beyond and the vivid now before our eyes, and in witnessing Kroll’s paintings we are drawn into an uncanny place between.

I paint personal refuges in the form of still lives and imagined landscapes—places to visit for solace, meditation and sanctuary. I work intuitively to create a connection between the viewer and the power of place, the web of life, the idea of nature itself.

Such congruences of stillness and action, life and dream, captured flawlessly in stately layers of oil and lacquer, take time to create, and an opportunity to view David Kroll’s recent works is rare and significant. Kroll, who divides his time between Washington state and San Miguel de Allende, Mexico, has been exhibiting work in North America for four decades; his work’s luminous verisimilitude captivates and confounds viewers in a way that connects it to both contemporary, conceptual painting and traditional realism. In Nature as Manifesto, an essay about Kroll’s work, the artist Buzz Spector writes, “Kroll is not a moralist; his deliberately spare arrangements of pictorial elements are a way to push back against our yearning to find a narrative in these exquisitely crafted scenes.”

Kroll says “Thematically I am interested in the interaction between man, and manmade objects, and nature. In a painted still life these ideas collapse on each other and raise many questions. Which is more beautiful—a rural landscape or a Chinese vase? Which is more alive, which is more still?”

An immediate and fascinating contradiction in many of Kroll’s works are his depictions of living things. Fish, birds, and reptiles populate the paintings’ centers with a quickness of pose and clarity of expression that suggest dynamic movement; the sinewy curve of a koi mid-turn, or the hesitant, transfixing glance of a small bird perched atop a vase, are intriguing and surreal in contrast to the timeless vessels and backgrounds around which these living things hover and shift.